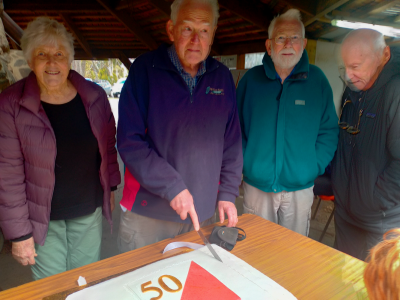 Orienteering Tasmania celebrated its 50th Anniversary back where it all started at The Lea in southern Tasmania.

Over 100 enthusiastic competitors travelled through time, navigating a hand drawn course on a black and white map and writing down letters with a pencil at check-point, through to control punches, and finishing with a modern, blindingly colourful map with electronic punching.

Orienteering history was on display.  Various memorabilia and many photos brought along by members  were devoured almost as eagerly as the BBQ and celebratory cake. The RAAF graced us with a flyby shortly before almost-founding member Ross Kelly spoke about the early days of orienteering in Tasmania.  A few seldom-seen orienteers from days gone by attended, showing off their period costume and catching up with members of the current orienteering community.