Entries are now open for the East Coast 3 Days 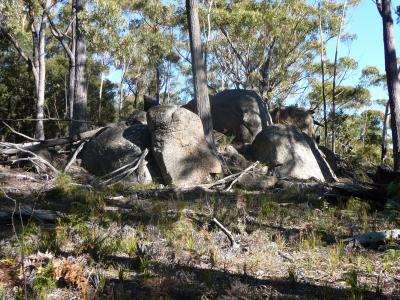 These events are brought to you by EVOC (days 1 & 2) and Australopers (day 3). Deadline for entries is Sunday 28th February at midnight (Events 1 & 2) and Wednesday 3rd March (Event 3).

Day 1 is on Chiron. Chiron is the eastern edge of the Golden Fleece map, and is packed with intricate mining detail - a rich feast of features. Running is often fast, sometimes slow. Navigation is micro-scale, and ravines and patches of dense vegetation force route choices. Winning times around 30 minutes are expected. There are courses to suit most but some climbing ability will be required to negotiate the landscape. This event should have been held last year in late September/ early October during the “Carnival That Never Was” but permission was withdrawn because of a planned fire reduction burn. Because of freak weather conditions (extreme winds) this fuel reduction burn got out of hand and most of the vegetation in the area was burned. As a result the landscape in the area looks rather bleak. Ergo you can (1) ignore most of the green on the map and (2) expect to come back covered in black.

Day 2 (OST1) is on Siamese. The new OST format is being used. There will be 8 courses and no age classes. Competitors are free to enter the course of their choice. Series points are accrued by course (rather than age class) so choosing the same course at each OST event will improve your final placing at the end of the year.

The Siamese map borders the western edge of Golden Fleece. The map derives its name from the Siamese Tin Syndicate which built the mighty Siamese water race, high up on the southern edge of the current map. At up to 2 m deep, the race was dug in 1932 by 100 workers and brought water from the Intake Bridge below St Columba Falls a surveyed distance of 45 km around the spurs to the map. It included a 1400 m long siphon pipe to span Terryvale Rd. and provided most of the water for the alluvial tin mining detail we see today on the Argonaut. The terrain on Siamese North includes spur gully which is generally fast, open eucalypt forest but with some steep slopes and some thick vegetation in gullies and marshes. Eroded tin mining areas are a feature. Part of the area of Golden Fleece and all of Siamese North were cleared of thicker vegetation by a controlled burn last year while other parts are thicker, with fallen timber making fast running more difficult.

Day 3 (OST2), Middle Mayhem, takes place on the deviously complicated Littlechild Creek map. Mayhem in a metaphorical sense. More controls than you can imagine, turns and twists, boulders and cliffs abound, bands of green to wend around and for you to be mayhemically (not a real word but it sounds cool eh) lost and found. Useless trivia fact of the day – did you know Mayhem are a Norwegian metal band? Kinda interesting the link between the ancestral home of orienteering and the theme of this event. The terrain is undulating eucalypt forest with complex areas of granite and bare rock. Runnability is generally good. Some areas of low visibility and bands of marsh reduce running speed.