An orienteering relay race is a competition where each member of a team runs an individual course, one directly after the other in a pre-determined order. The result of the race is judged according to the total time taken by each team, however in closely contested competitions, the winning team will be the team whose last leg runner crosses the finish line first. The reason for this variation to individual orienteering races that use interval starts (with timing to the second) is that sub-second differences can be accommodated (see IOF rule 23.9 and OA rule 23.7).

What about one-person relays? Well a “one-person relay” is not really a relay race, it’s a mass-start individual race designed to minimise runners simply following the leader, but it will be discussed in part 2, along with sprint relays and other options for team races.

Relay orienteering has the following characteristics:

When deciding on course variation methods, it is important that the essential nature of orienteering is maintained – competitors must solve the navigational challenge by themselves, so they can’t assume that they will be able to simply follow other competitors, hence the need for variations in courses.

Balancing the need for variations in courses is the objective of providing close competition, so the best running times on the different courses should be as close as possible for the enjoyment of competitors and so that spectators can easily follow the progress of the race.

Three of the most common techniques for designing relay courses are described below.

The Motala method is the simplest method for creating course variations. A number of courses are set, corresponding to the number of runners in each team, for example, three courses (A, B, and C) for teams of three runners.

Each team member runs one of the courses, and in aggregate the team runs A, B, and C. Team members normally do not know prior to the start which of the variations they will be running, nor do they know which variation other teams’ members are running.

This method ensures that each runner in a team runs a different course by means of “forks” (sometimes known as “gaffels”). Courses are generally designed so that the course forks at one or more points and join later as shown on the schematic outline below, however the method relies on maps that are rich in detail and provide comparable runnability and navigational challenge for each leg variation. 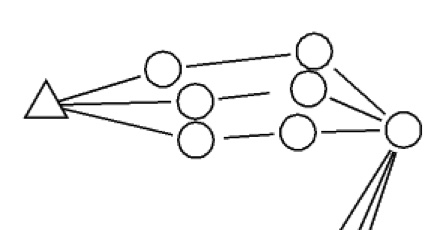 The Vannas method is similar to the Motala method, but by splitting each course into two parts you get a greater number of courses (nine compared to three), allowing 36 unique course combinations for three-person teams (i.e. in any group of 36 teams, four teams will have the same variation in each leg, but teams can be arranged so that no teams will have the same variations in the same order across all legs).

Although Vannas method courses are planned in the same way as Farsta method courses, they use a specific forking formula and are thus differentiated from Farsta courses which tend to have more forks with fewer controls in the fork.

In part 2 I will cover sprint relays, one-person relays, and other formats for team competitions, as well as organisational aspects such as course planning and event management software and arena layout.