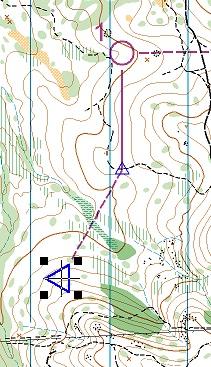 The control description will appear as follows:

This indicates that there is a marked route of 400 metres to the track, but there are no markings beyond the track and competitors are expected to navigate to the next control from the end of the marked route (note that when the map is printed, the small blue triangle shown in the example does not appear).

How is this done?

In the Condes tool bar, there is a small triangle symbol with a dashed line into the triangle and a straight line from the triangle (it’s the fourth symbol from the top, not to be confused with the larger start triangle which is second from the top. When you hover the mouse over the symbol, it’s described as “New end of marked route”).

Select the “New end of marked route” tool and click on the map in the position where you want the marked route to end in the same way as you would place a control on the map. After the course has been defined, the leg will go directly between controls (or in this instance, from the start to control 1). Select the leg, then click on the “Insert a control into a leg” tool – it looks like this

and move the leg line to the small blue triangle to create the partial marked route.

Another case where it can be used is for spectator controls where you want competitors to run through the arena but have them navigate from the arena to the next control. You could simply have a control in the arena with a marked route to that control, but occasionally competitors forget to punch the control in the arena and are disqualified, which is not what we want to achieve. Using the “Follow taped route away from control” option (see 15.1 of the IOF Control Descriptions 2018 manual) avoids the possibility of competitors being disqualified for simply forgetting to punch a dummy control.