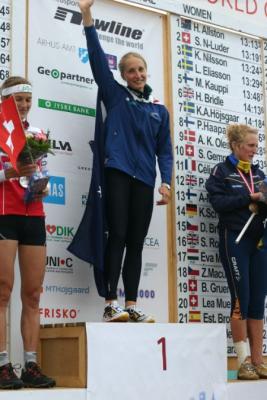 Orienteering Australia has inducted Tasmanian and former multiple Word Champion Hanny Allston into the OA Hall of Fame in the Athlete category.

Hanny is Australia's most successful athlete ever at the international Elite level. She made her debut on the Australian team in 2004 at just 18.

Hanny is now best known for her amazing trail running achievements. She sets herself challenges that for most of us seem completely nuts. Like running Tasmania’s 92km rugged South Coast Track in 12 hours and 20 minutes (most people take a full 5 days). Recently she completed a 19 day solo traverse for 700km across the French Pyrenees Mountains.

long the way Hanny has also established her own business Find your Feet. Originally Hanny focused on the provision of performance coaching for people to improve their trail running. But now the business has grown, as a partnership with her husband Graham Hammond, to also include a boutique outdoor adventure and trail running store (based in Hobart and Launceston, but also with online sales. There is a 20% discount available for Tasmanian orienteers by using the discount code TasO). They also offer trail running tours in wild places in Tasmania, Australia and around the world.

Here is a complete list of Hanny’s international achievements in orienteering: