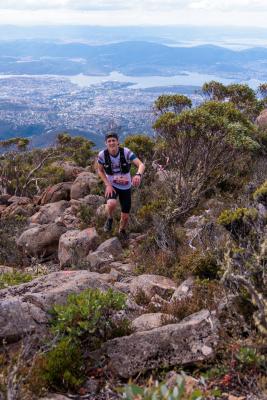 Last weekend, a number of orienteers took part in the inaugural Kunanyi Mountain Run - a trail running festival held over two days on the slopes of Mt Wellington. The festival consisted of a 68km mountain marathon (solo and relay), a 27km mountain run and a retch-inducing ‘vertical kilometre’ – 1000m metres of climb in around 5 kilometres.

Orienteers have consistently shown their class in tough trail runs, and this was no exception. In the 27km mountain run, Oscar Burcide and Joe Dickinson finished in 3rd and 4th place respectively, less than a minute apart. Xavier Scott also finished in the top 50 in a large field. In the vertical kilometer, Brodie Nankervis (pictured) finished in third place, edging out 4th place by a second in a sprint finish. Kirsten Fairfax and Simon Louis took part in the 68km relay, both recording excellent times on perhaps the toughest leg of the day.

Not only did orienteers take part as competitors, they also assisted as course marshals, markers and sweeps. Marshals included Cathy and Jon McComb, while Clare and Greg Hawthorne helped out with the course marking. But a special award must surely go to Lucy Hawthorne, who marked out almost 20km of trails (including over 1000m of climb) before the weekend, following it up a day later with a 27km ‘sweep’ of the mountain run. Now that’s commitment!