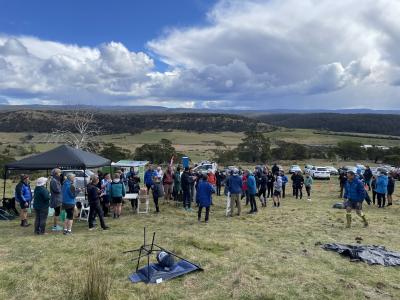 2021 has been a tough year for Tasmanian orienteers. Not only did we lose one of our best areas - Pittwater - we also lost our Australian Championships carnival (for the second time). But a quick glance through Eventor shows just how lucky we are in many ways. In addition to a year of uninterrupted local events, many of us attended an exceptional national carnival in NSW at Easter. And while other states have been contemplating the heavy lines drawn through their state championships, we were able to compete in another great weekend of orienteering on our beautiful East Coast.

Saturday brought blue skies and blustery conditions for the Tasmanian long distance championship at Kelvedon, where over 120 entrants battled it out over the rocky hillsides. Some challenging controls and tricky route choices saw the lead change many times in some courses. In the open age classes, Mikayla Cooper edged out Ainsley Scott by just over three minutes on a tough W21 course, while Joe Dickinson ran a strong race to beat Jon McComb by just over five minutes in M21. Other stand-out performers were Euan Best in M16, just ahead of Jett McComb who also ran strongly; and Sue Hancock in W55, with a blistering race that saw her take out her age class by almost 20 minutes. Full results can be found here.

By Sunday the wind had died down and skies were still blue. Courses were shorter and faster than Saturday, which made for fun racing. A novel forewarning system of a cowbell-in-a-tree provided light relief as team members struggled up the final hill. Later finishes were also treated to a brief hail storm, but the day otherwise went off without a hitch. Winners on the long course were Jon McComb, Kirstin Fairfax and Lachlan Cherry; the Medium was won by Allison Stubbs, Julia Powell-Davies and Eloise Fisher, and the Short course was taken out by the happy trio of Liam Wolfe, Callum Degenaar and Jo Mitchell.

Thanks to organising/planning teams Paul Enkelaar & Lindsay Pender for the Tas Long Champs, and Sally Wayte & Jeff Dunn for the Tas Relay Champs.