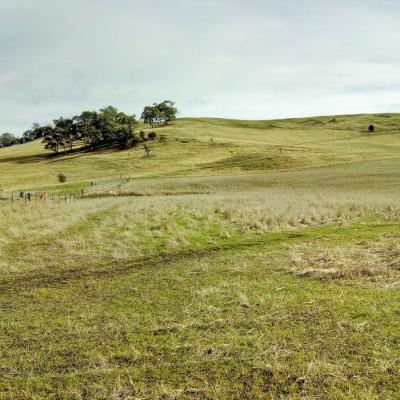 Over 100 orienteers took part in the 6th OST event for the season at Lovelybanks. Taking advantage of the complex sandstone terrain, course setter Mike Calder took competitors to a little-used area of the map, with a long walk to the start (pictured) and finish across windswept paddocks. Fortunately, courses took place on the sheltered side of the hills, where milder conditions prevailed.

Stand-out performances on the day included Jeff Dunn’s convincing win on Course 3, six minutes ahead of Bernard Walker in 2nd place; while Cathy McComb continued her domination of the women’s race with a comfortable win over Liz Canning.

On Course 2, Anthony Stoner claimed a rare victory over son Niko, who limped over the finish line after a cliff-related knee injury (fortunately he was OK!) to finish in 2nd place. The open women’s race was won by Arabella Phillips, while the evergreen Jon McComb once again proved he’s not just a pretty coach, finishing less than four minutes behind ‘Lightning’ Joe Dickinson on Course 1.

A tightly-contested Course 4 saw Clare Hawthorne, Anna Dowling and Ainsley Scott all finishing within 18 seconds of one another, with Zoe Dowling less than two minutes behind in fourth place. All four women held the lead for part of the race, with the final result coming down to the ‘sprint’ finish. Further down the field, Chris Brown edged out Sue Hancock by a mere 12 seconds; just over a minute separated super-vets Randall Hope, Bert Elson and Greg Hawthorne; while only 10 seconds separated mother-and-daughter combo Sophie and Sussan Best. A close race indeed!

Course 5 was convincingly won by Nicola Marshall, ahead of the perennially ‘excellent’ Hilary Cane, followed by Renny Duckett.

On Course 6, newcomers dominated the top end of the field, with Chase Clark and Austin Hughes just edging out Eloise Fisher, Hudson Hughes and Imojen Pearce; while Course 7 was won by interstate visitor Amy Ting.

Thanks to course setter Mike Calder and controller David Marshall for a great day in the forest.