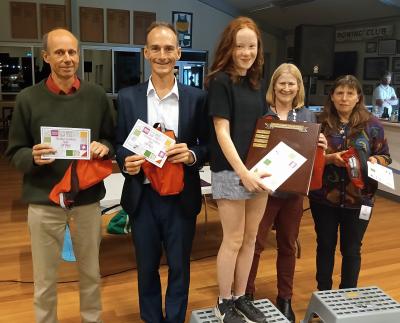 It was a special moment this year when the 2020 John Brammall Perpetual Trophy for Individual Excellence was presented to John’s grand-daughter Liana Stubbs, by her grandmother Valerie Brammall.

The trophy is awarded each year to the orienteer with the most Excellence points for the year. Excellence points are awarded at each OST event, based on kilometre rates and an adjustment for age and gender. The trophy is awarded in memory of EVOC member John Brammall in recognition of his commitment to orienteering at the national, state and local level.

The next four place-getters in the 2020 Excellence Series were Jon McComb, Jeff Dunn, Cathy McComb and Christine Brown.

Next year our premier bush orienteering series, Orienteering Series Tasmania, is changing slightly. Entry to the events will be via course, rather than age class, meaning any orienteer can run any course. There are also some minor alterations to the courses on offer. To read more about this change and see the new structure see here. ...Read Full Article 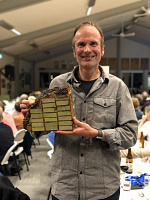 Our Schools and Twilight events start this Wednesday 21 October in both Hobart and Launceston. Due to COVID restrictions, all events require online entry. For the Hobart events you can enter for the whole series at a discount rate. Each week entries will close at midnight on the Sunday before the event. Hope to see you there! ...Read Full Article

The Carnival That Never Was

Over 100 orienteers travelled to St Helens last week to take part in various races in The Carnival That Never Was (TCTNW). After a last minute venue change, we enjoyed challenging middle-distance courses set by Jeff Dunn at The Golden Flea on Saturday 26th September. Sunday introduced us to a fantastic new area adjoining Golden Fleece, The Siamese Race - named after the century-old mining 'race'… ...Read Full Article